World March for Peace and Nonviolence 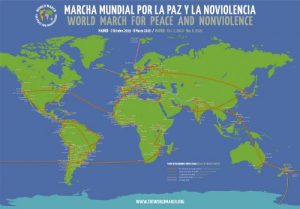 Denouncing the dangerous world situation with growing conflicts and increased spending on armaments while, at the same time, many people suffer from lack of food and water.

Keep on raising awareness that only through “peace” and “nonviolence” will the human species open its future.

Highlighting positive actions that communities are developing around the World towards the full respect of human rights, non-discrimination, collaboration, peaceful coexistence, and non-aggression.

Giving voice to the new generations who want to take over and leave their mark, by spreading the culture of nonviolence in the collective imagination, education, politics, and society as it recently and quickly happened for ecological awareness.

The ban on nuclear weapons. Proportional disarmament and the renunciation of states to use war as a mean to resolve conflicts or take over resources.

“We are determined to avoid wars for future generations.”

“United Nations watching over all the citizens of the planet.”

The creation of an entirely sustainable planet, considering it is a limited space we absolutely must take care of.

“The Earth is everyone’s home.”

The integration of regions with socio-economic systems in order to ensure well-being and resources for all, with the aim of eliminating world hunger in the next 10 years.

“We want to eliminate hunger in human history.”

Say no to discrimination of any kind: sex, age, race, religion, economy, etc.

“No human being above another”

“Nonviolence is the force that transforms the world.” 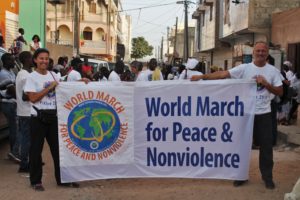 The Second World March for Peace and Nonviolence started from Madrid on October 2, 2019, the international day of nonviolence, exactly ten years after the beginning of the first March. It came back to the Spanish capital for the conclusion on March 8, 2020. Despite some changes and cancellations due to the coronavirus emergency, the March reached dozens of countries on all continents, involving thousands of people. The official purpose of the Second Edition was to “highlight the dangerous world situation with growing conflicts, continue to raise awareness, make positive actions visible, give voice to the new generations who want to start a culture of nonviolence”. Unfortunately, the pandemic forced the Rome March Committee, to which Energia is part, to cancel the events scheduled for February. However, several initiatives took place in Italy, including “Mediterranean Sea of Peace”. A sailboat sailed across the Mediterranean Sea, asking for its transformation into a sea free from wars and nuclear weapons.

Energia per i Diritti Umani contributed to the organization and realization of the World March events in Senegal and India.

On October 26, 2019, the March arrived in Saint Louis, the first stop in Senegal. The base team and volunteers from Energia and Énergie pour les droits de l’homme Sénégal met with religious, political, and civil society authorities. The March presentation event took place at the “Don Bosco” center in the afternoon, closed by a performance by the “Juvep” acting company and a short concert of the local rapper Général Kheuch.

On October 27 and 28 the team was in Thiès, taking part in a conference about the country’s natural resource and stability, with the mayor Talla Sylla. Meetings for the presentation of the March took place at the “Sup d’Eco” university and in the “FAHU” and “Malick Sy” high schools. The latter has always been the center of Senegalese student activism.

On October 30 and 31 the March reached the rural areas of the country, specifically the villages of Ndiandiane (Department of Mbour) and Bandoulou (Department of Kaolack). Activities took place in the Multifunctional Humanist Centers built by Energia. The March was presented in the presence of local authorities. Moreover, discussion forums on various topics took place as to involve the population. Specifically, they were focused on the topics of environment, human rights, women’s rights, education, and health. A play on early marriages and political violence, followed by a party with music and dance, concluded the event in Ndiandiane.

On November 1, the March reached the island of Gorée, in front of the capital Dakar. This place is highly symbolic, as for centuries it was the starting point for millions of African slaves forced to cross the Atlantic to reach the Americas. More than eighty children of the “Léopold Angrand” primary school created a great human symbol of Peace there.

On November 2, the “Humanist Forum for Peace and Nonviolence” took place at the Keur Marietou Humanist Center in Pikine Est. About a hundred people took part in round tables discussions addressing environmental issues, nonviolence, and the role of women in society. In the afternoon, a march led the participants to the town square, where the presentation event took place in the presence of the authorities and about 150 people. During the event, some moments were dedicated to music and theater. Some citizens from The Gambia and Mali and from the Ivorian community of Dakar took part in the event.

On February 1, 2020, the team members were guests of honor during the “Peace Day – 2020” in the Tamil Nadu region, on February 1, 2020. The event was organized by the “Kshatriya Vidhya Sala English Medium School – Virudhunagar 2” in collaboration with “JCI Virudhunagar” and “Aid India “. The program was full of activities and involved more than 550 students. The sung prayer for peace and welcome ceremonies for the team were followed by several speeches and performances by students. The environmental issue was at the core of the two performances “Nemo’s talk” and “Heal the world – The fluttering of the bee goes”.

On February 2 and 3, some members of the team (those who physically carry the flag of the March from one country to another) and our volunteers visited the two schools supported by Energia in the towns of Virudhunagar and Sathankulam, which host more than 600 students.

At “Island of Hope Home” in Virudhunagar, the members of the team highlighted 3 fundamental elements of the World March: the need to put pressure on national and local governments to make India ratify the “Treaty for the ban on nuclear weapons”, the need to invest resources in the fight against climate change and the fundamental role of teachers in creating a nonviolent awareness consciousness in the next generations.

In the “Ave Maria Matriculation School”, numerous activities were carried out, focusing on the topics of Peace and nonviolence. During the morning, children created 15 symbols that represented peace and nonviolence for them, using colored sands and flower petals. In the afternoon students put on several plays.